What is Proxy Checker?

This tool is used for checking if your proxies are functioning as expected. Simply download and enter your proxies then click "Check". Reliable working proxies are key to successful internet marketing. Often you may try and save money by purchasing semi, or even scraping public proxies instead buying dedicated only to find out most of them are not going to work for your project.

This tool has three methods of checking if your proxies are working or not.

Often people purchase their proxies then just enter them into their chosen bot and let the bot work away. However what happens if even just 10% of those semi-dedicated ones you are sharing with others are not working. Will your bot / application tell you? Most would not. You'll be limiting the effectiveness of your internet marketing efforts in a way that could easily be avoided if you used this checking software. Another advantage of a software tool that you download and run over an online checker is that when you enter your proxies into online checking services you don't know if that data is going off to be part of some public list. Where as with this download you can use something like wireshark to see that any data enteed into the application stays in the applicatiom. 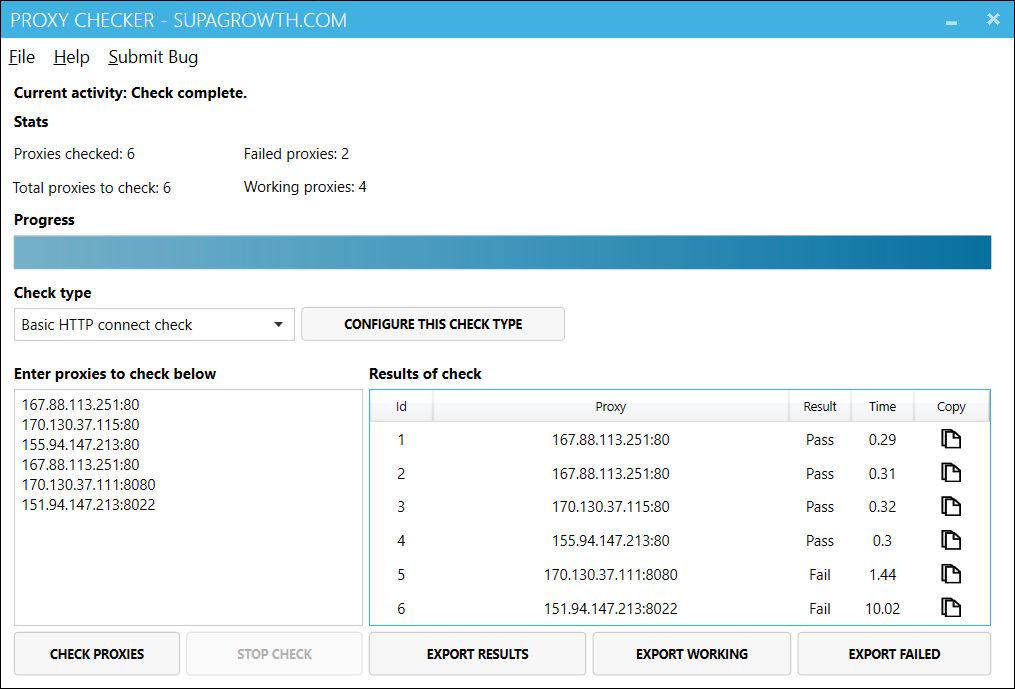 Watch it in action / Tutorial

Hi guys it's Jamie from MaxResultsSEO.com and in this video I'm going to show you how to use my proxy checker software tool now. So what this tool basically allows you to do is to enter your proxies in there and it will tell you whether any of them are duds (proxies not working), so whether they're just completely down or whether they're you know they're semi dedicated, but your proxy supplier has sold them to like 50 other people and they're, just being you know, completely stretched out beyond usage. It can also tell you if you set up correctly what websites are blocking your IP address or your proxy IP address. Okay, so I'll go through the different types of configurations you can have and then we'll see it in action, so first off you've got the basic HTTP connect check, so all this does is load a URL in there. You can leave example.com in there that's fine and then it basically sees if it can connect to that website successfully in under that amount of time (the proxy timeout). So let's run that and you can see that all my proxies are fast but actually you can see that one's a little slow, probably because these are semi dedicated, so someone else is probably doing something with that proxy.

So, if I wanted to, I could change that down to two seconds and it would filter that proxy out for us and put any slow proxies in there. I'll show you it not working, so let's just break a few of these proxies and now you can see two of them fail the check straight away and you can sort them and see that those two failed and then you can export the working ones, all of them or just the failed ones whatever you want to do so I'm just going to put the working ones back in now. The next check is a HTTP response code check. So for those either don't know, whenever your browser loads a web page you'll get a HTTP response code back from the web server, so you know the websites web server will give back to your browser and it'll be a number generally between 200 and 900. It's basically a summary of that connection attempt so if it was successful, you'll get 200 and then http code of 300 generally redirects and then anything 400 above is generally an http error.

So you can configure this to connect to example.com and if it's 200 then pass the proxy. Otherwise, if it's anything else, the check will fail, so what we're going to do here, I'm just going to turn that around so it fails, if it's a 200, so that should cause all the proxies to fail. So normally you'd use something like if you thought a website was blocking your proxy and giving you a 403 HTTP code, which is a forbidden code, and you can either do pass if the page gives a 200 or fail the proxy if the HTTP response code is 400 or 300 or 400 or whatever again so, that is the HTTP response code check.

Next up, we have a HTML check, so basically, what that does is it'll load a website again and it'll pass the proxy if that HTML is present in the response or you can fail it if the HTML is present in the response, so if you think the website is blocking you, then you could have what it says when it blocks you. You know it's like "your IP is blocked" then you could put "blocked" in there and then fail the proxy if, when you're connecting to example.com, the HTML that comes back through the proxy contains the HTML "blocked". So hopefully that makes sense, so yeah that's it.