What is Spun By Google Article Spinner?

Spun By Google Article Spinner is an article spinner software tool that uses Google translate to spin your content so you know the result is grammatically correct well formed content in the eyes of Google. This content spinning tool simply throws your content in and out of Google translate. There are different options for how many times you want it spun and how hard you want it spun. The content it generates is perfect for lower tires in tired link building campaigns and even expired web 2.0s. NOTE: Please do not use spun content on your main/money website it is against Google webmaster terms and can result in your website being deindexed.

By throwing your content back and forth through Google translate it changes but is always kept gramatically correct due to Google's excellent translation service. You can spin the content up to 10 times and spin soft, medium or hard. You can also shuffle the sentances.

The quality of spun content decides if the web property (page) is indexed in Google or not, if its not indexed in Google then the link juice from those pages will not be passed to your money site or up your tiers. Using spun content will quickly allow you to build more content surrounding your links making them contextual. 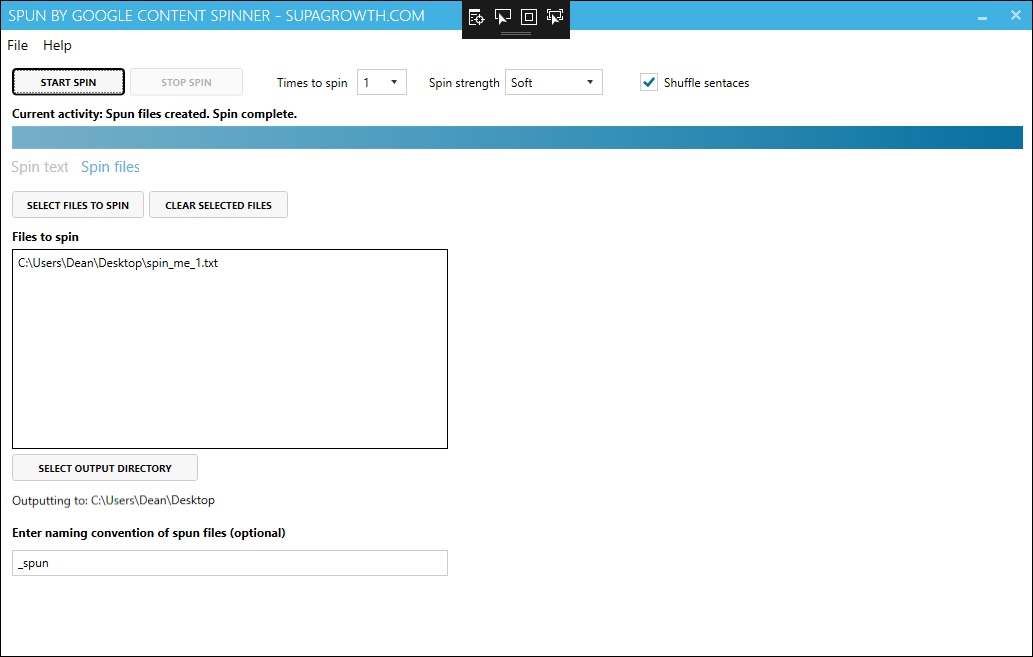 Watch it in action / Tutorial

Hi guys it's Jamie from SuperGrowth.com and in this video I'm going to show you how to use my content spinner called Spun by Google, so basically what this does is it takes content from whatever source you decide and then it spins it to try and make it unique in the eyes of Google. However, the difference with this content spinner is: it actually uses Google to spin the content for you, so what it does in the backgrounds it goes off to Google Translate, throws your English text American texts into Google Translate and brings it back in another language, and then does the opposite so say originally goes from English to French it'll, then fire it back from French to English and every time it does that it will come back slightly different.

So the advantage to using this piece of software over traditional content spinner is a content that this creates it's created by Google. So you know in the eyes of Google, it probably thinks that this is grammatically sound text. Now, before I give you a demonstration I'm just going to go through some of the options, so here we've got the amount of times you want it spun so the amount of times it goes back and forth through the Google Translate API. How hard you want it spun, so in the background each one of these actually corresponds to a different language, but don't worry about that for now, because the end result, you know you still get spun English back. It's just how hard you want to spin it, and if you want to shuffle the sentences, it will basically take every sentence and then move it to some random position in the article that kind of helps, it will make it less readable human-to-human, but it does help it look more unique to Google because you don't have big blocks of duplicate content then. It's worth just pointing out by the way, spun content, don't ever use it on your money site or your main site, because it's a really quick way to get deindexed by Google. You should only really use it for tiered link building or maybe you've got some expired web 2.0 s that you want to point to your money site and you don't want to spend ages putting ten pages together on each one of them then you can just put some spun content on your web 2.0.

As long as your whole backlink profile isn't spun content, it's relatively safe. Okay, so we'll put in some text and I will pretend my website is about dog training and we'll shuffle it and spin it. Now, when it spins, it obviously breaks it up into chunks to go through the Google Translate API. You can spin files, so I've got some text in that file, then select the output directory and it start spinning the text and that will create a file called spin_me_spun.txt and you should be able to see it. Yeah there we go in the specified output directory and you can spin as many files as you like as long as their text files. Okay, that's it thanks for watching guys.