What is Supa Simple Rank Checker?

Its a easy to use SEO rank (serp) checking tool. This desktop application will sit in background checking the search engine position (ranks / serps) of all your keywords on both Bing and Google. You can enter your keywords and website(s) and it will check every day or you can run manual updates whenever you add new keywords or think there might be some movement in your rankings. See the daily changes for each keyword, see each keyword compared to a week or month ago and see each keyword visually with graphs. You can import lists of keywords and export ranking results.

Supa Simple Rank Checker fires HTTP requests at the two most popular search engines (Google and Bing) then checks to results for each entered keyword to see where you website ranks for the search term(s). This is then stored and automatically checked the next day or when you run a manual update.

Knowing if your website is going up the search engine results or down can make or break your business. This tool can tell you if all your hard SEO work is paying off. 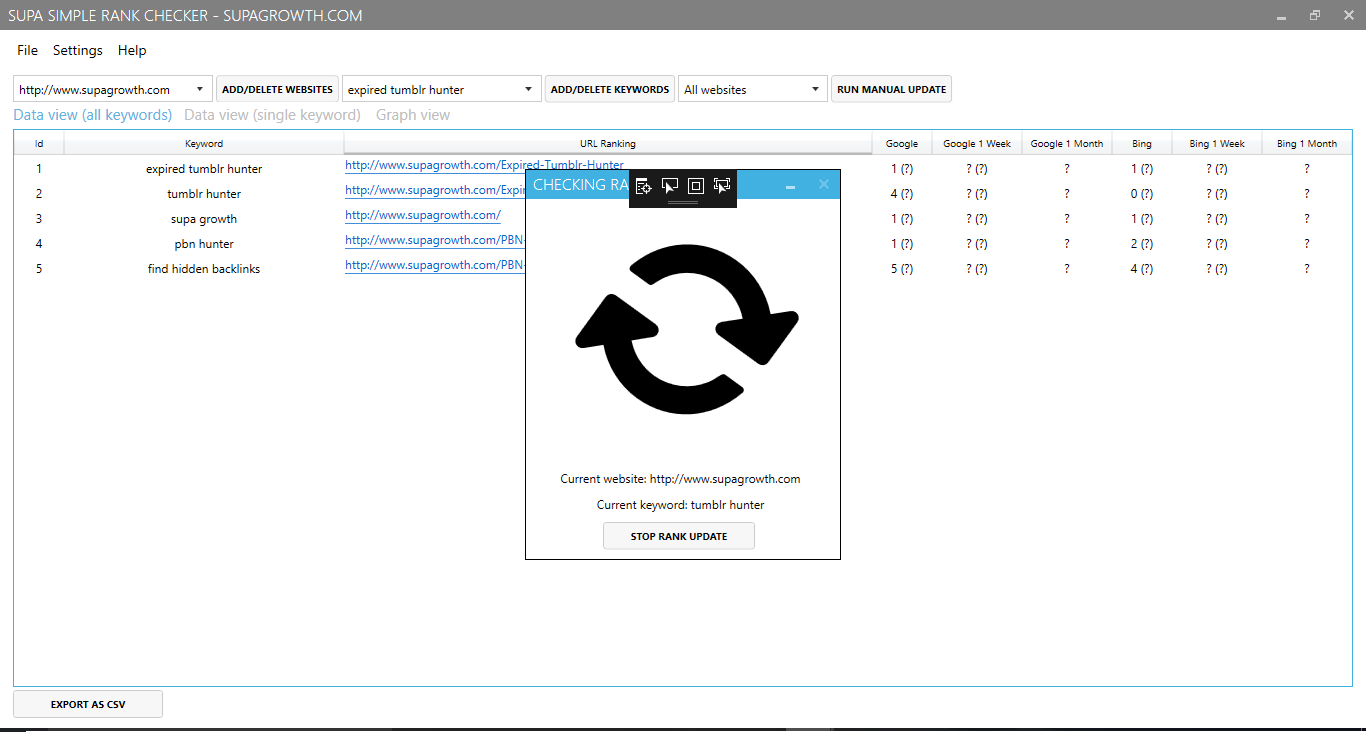 Hi guys it's Jamie from SuperGrowth.com and in this video, I'm going to show you how to use my super simple rank checker tool now, basically, all this does is it allows you to keep track of your keyword positions in both Google and Bing for as many Websites and search keywords as you want pretty much. Really you're only limited by the pause that you have to have between sending each keyword request to Google, so you know you can have it support between two and three thousand keywords. Okay, so I'll go through some of the settings first so settings here, so most of them are pretty self-explanatory. Start windows, starts so that'll run if that's ticked, when your PC boots up go and run minimized in the background and run daily SERP (search engine results positions) checks automatically. If that's ticked, then, once a day, all the updates will automatically run without you having to do a manual update and that's whether you want it'll alert once the daily check is done.

Google sensitivity, if you find your IP address keeps getting blocked for some reason then just crank that up a little bit and also here if you are running other stuff in the background thats scraping Google, then you'll probably want that cranked up as well. So I'll go through the all keywords stuff first before that, adding websites is pretty simple. Really you just click that button you decide which Google you want to check your rankings on and that's pretty much it. Once you've added your website, you can add keywords: we can import them from a line separated file and that's when you want to run so now I'll just explain the positioning and how that works on the all keywords tab we selected here.

So this is your position. Currently, your Google position, and that's your Bing position currently now with this keyword we're number one for expired tumblr hunter. Now the second figure here zero, so that's the movement compared to a week ago, so you can see your Google position a week ago. We were position one and we are on position one today. So that's a movement of zero and the same goes for these two here, Google a week and Google a month. It's a question mark because we don't have the data from a month ago yet, it hasn't been running that long, so you can see this working here for Bing, so today we're position twelve for this search term and a week ago we were position seven, so we've moved back five places.

I'll show it you in action now, so we're going to do a manual update. You can have all websites selected or just one website. So we clicked manual update and there you can see the keyword, the website that it's doing and the keyword that it's doing. If you've got tons and tons of tons of keywords in there, then it will be a little bit slower than that and you can see it's done.