What is Bing Keyword Tool?

This Bing Keyword Tool sends requests off to bing in the background automatically and scrapes the results to create long tail keywords lists that users who are searching with bing are entering into Bing. You simply enter your inital keyword(s) choose some simple basic settings and click generate to start checking for long tails. For example if your niche/main keyword is cooking, simply enter cooking and click generate long tails and this tool will bring back hundreds of cooking long tail keywords for are easy to rank for. Helping you gain more traffic and boosting your websites online visibility.

It allows you to find hundreds of easy to rank for long tail keywords that Bing users are searching for right now. Many people just focus on Google long tail keywords and forge that the Bing search engine has an entirely different demographic/user base. More women and elderly people use Bing over Google. 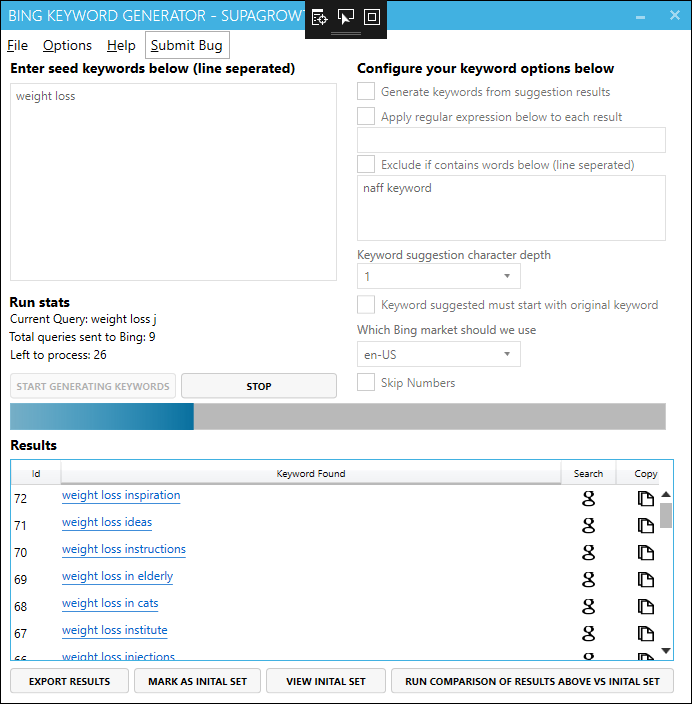 Hi guys it's Jamie from SuperGrowth.com and in this video I'm going to show you how to use my Bing keyword generator. Basically, what this tool does is it allows you to enter your main keywords and then it'll, essentially mine the Bing also suggest longtail variance of your main keywords. So, for example, if your main keyword is gaming, it'll go off in the background, and enter gaming in and then put gaming a you know, how, when you put a keyword into search boxes these days on websites, you'll give you and also suggest list choose from. So basically, it'll go away and do that for gaming, a into Bing and then you'll get a list of everything that begins with you know a all the long tails are like gaming, Apple, etc. So that's a brief summary of what it does I'll go with.

Some of the options now before I show you in action, so the only option we here we have here in the settings is that the delay between queries, the Bing. Now, if you want a few keywords, that's absolutely fine how it is. If you're doing a lot of keywords, then you will want to bump that up quite a lot. Just so Bing doesn't block your IP address. Now, let's go through some of the options on the right here, generate keywords from suggestion results so say we're doing gaming, so it'll start off gaming a and then you know one of the ones you'll get loads back. One of the ones might be like armchairs or something my appear. If we have that option ticked, it will then generate long tales from that. So a and then it'll go all the way through the alphabet and do one to ten as well.

I've chose a maybe you know gaming armchairs Apple and then it will carry on and then it'll do it again. Hey and it'll just keep doing it all the way through the alphabet. You know all the way from 0 to 9 as well, then I'll just keep mining as many many many long tail variants of your main keyword gaming. Here as it can, and you can have multiple keywords as well. You can apply a regular expression to each result. If you want to filter out certain things if you're say you're not interested in gaming laptops at all, then you can put laptop in there and any long tail that comes back. It contains the word laptop or you've filtered out keyword, suggestion, character depth. So, as I was saying, it'll go off to Bing and type gaming a and then B and then C into the auto suggests to mine as many long tail variants of your main keyword gaming as it can, so, if that's set to one the gaming, you know ABCD all the way through the alphabet and 0 to 9, but if sets to two and it will do gaming a a B C just to get them more just to go for those really big long tails that people not that many people search for some might want that some might not there'll be a lot of those will have like zero competition.

You'll have like forums and stuff popping up so there'll, be you know, keywords you can easily get position number one for, but they might not have much traffic. So hopefully that makes sense keyword suggested must start with the original keyword. So if we're doing so, we've got that keyword suggesting character, depth two, maybe even three we might get some long tails back there aren't that they're related to gaming, but not quite gaming. So if you only want things that purely are long, tails start with your main seed keyword here and then tick that so it's basically saying it won't show you anything that doesn't start with gaming. If you have that ticked and finally, which big market should we use. That's fairly self-explanatory, okay! So well, let's start mining, we'll just do it at one for now, so, as you can see there, we go mining keywords now in a minute when that's done I'll show you what these comparison features are down here, you can click it. If you want to search Bing for it or you can click there, we can copy the keywords you clipboard right there. We go so with mine, two hundred eighty long tails. If you want longer tails, then up the keyword, suggestion character death, so we can export them.

Now, if we mark these as the initial set, so that set of long tails, we've mined has now been recorded and we can view the initial set there. So what we can do now is say I dunno Nvidia or someone release an amazing new graphics card, and you want to see the you know the long tails that people are searching for then what we can do is we can run this again and then, when we've got our new long tail results set. We can run a comparison of the results that we've just had returned versus the initial set, so that would have been the set that we just set now the group of results that we've just set now, that makes more sense so hope, hopefully, that sort of makes Sense so you're, basically just comparing two sets of results for differences, and it will show you the differences so before we stop the video I'm just gon na show it up a little bit. It's gonna show, with a keyword, suggestion, character, depth, increased and you'll, see that it gets longer tails. So you can see how it's doing gaming a giving a JK blah blah, and you can see it's getting slightly longer tails now and if you want just as many long tails you can, then you know put down two or three and click the generate keyword. Some suggestion results, crank other delay and just leave it overnight and you'll come back to literally thousands and thousands okay. That's it thanks for watching guys.